Are you thinking about going to Mulu National park in Borneo during your 2 weeks in Borneo? Here you will find everything you need to know about how to get there, in which hotel you should stay and which tour you should do in Mulu caves.

There is a really good chance that this post contains affiliate links. If you click one of them, we may receive a small commission (for which we are deeply grateful) at no extra cost to you.

Our trip to the Mulu Caves

The national park is named after Mount Mulu. This is the second highest mountain in Sarawak.

Mulu can be visited all year around. It is in a tropical rainforest so it will often rain whatever period you go.

The wettest months are October to January and May to June. March and April have less rain. If you don’t like the rain than we advise to visit Mulu from July to September as these are the driest months. However, it still will rain 3 days out of 7 and it will also be hotter.

We visited Mulu ourselves in July and it was fine.

Mulu can be visited all year around. It is in a tropical rainforest so it will often rain whatever period you go.

How to get to Mulu Caves

The fastest way to get to the Gunung Mulu National Park is by plane. Only MASWings (a subsidiary of Malaysia Airlines) offers scheduled service to Mulu. 3 times a week there’s a flight from Kuching and there’s a daily flight from Miri.

Alternatively, you could make the trip by boat from Miri but that’s only if there’s enough water in the Tutoh river.  This is a very scenic option but it will take you 8 hours opposed to the 20 minutes it would take you to fly.

As we were staying in Kuching we took the direct flight from Kuching. 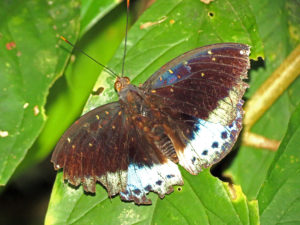 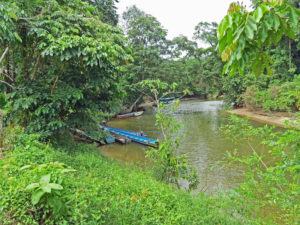 Accommodation in Mulu is very limited.  You basically have three choices.

Accommodation outside the park in rather basic hotels or homestays.  (dorms or very basic rooms with cold showers or no showers at all and electricity available 2 to 4 hours/day) : +/- 20-35MYR/pp

The Mulu national park accommodation is more expensive at 200-250 MYR/night.  The hotel rooms in the park are more luxurious. They offer electricity all day, hot showers and comfortable beds.  We loved our room!

Mulu Marriott is a good option if you are looking for a luxurious treat and want to spoil yourself. The hotel has a swimming pool and a spa. Breakfast and dinner are served in a buffet style. The hotel is 10 minutes outside the park but has a free shuttle that takes you to the entrance. If we would go back, Mulu Mariott would be our first choice.

Check here the price and the availability of the Mulu Marriott: BOOKING AGODA 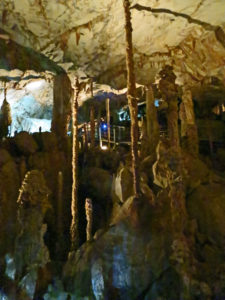 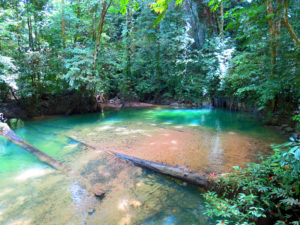 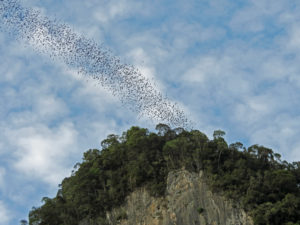 Mulu National Park was one of the more “professional” parks we visited during our trip. Since 2000 it has been recognized by UNESCO as a world heritage site. The park has a big visitor center where you not only find the typical informative panels but you can also watch a movie about the history of the park. The center also has a cafeteria and here you also make your arrangements for the Mulu national park accommodation inside the park.  Inside the park, there’re several well-marked trails with informative panels.

Mulu Marriott is a good option if you are looking for a luxurious treat and want to spoil yourself.

All main footpaths in the park are actually wooden walkways.  This gives you the comfort to look around and spot wildlife as you’re walking  (without risking to trip over tree roots).  Some may find that this reduces the charm of the jungle experience but I found it had more benefits than drawbacks.

Monkeys will be about the biggest wildlife you can find in the park as all other wildlife that lived here has been chased and killed before the region became a national park.  In addition to monkeys, we spotted many millipedes, walking sticks, dragonflies, butterflies, and salamanders.

On our first day, we took a tour of the Deer and Lang caves.  You have to book these Mulu caves tours at the visitor center as it’s only possible to visit the caves with a guide.  The Mulu caves tour is planned in such a way that it will end at the observation post in the park at the exact moment that the bats will start flying out at dusk. There’re millions of bats living in the caves and it’s really impressive to see them flying out.

You don’t require a guide or a tour to access the observation post. I would certainly advise heading to the observation post on your first evening, even if you have booked the Deer & Lang caves tour for later during your stay.  The bats don’t fly out every evening and it would be a shame to miss this spectacle.

Watching the bats flying out of the caves is still one of our best memories from our holiday in Borneo.

The caves itself are really worth a visit as well.  On our second day, we did a tour to the Wind and Clearwater caves. Not two of the caves are alike.

We only had 2 days but this park has much more to offer if you have more time.

The park is also known for the Pinnacles. You can see these during a 3-day guided trek. But there are many other, shorter, guided as well as unguided, walks too. The more experienced speleologists will also get their money’s worth here and can do guided adventurous hikes in the extensive cave system of the park.

The park also offers a night walk.  Together with a guide, you will go explore the forest at night spotting nocturnal animals. Maybe not for the faint of heart but it’s worth to see the forest in all its aspects.

There is more than enough to do in the Gunung Mulu National park to spend a few days. Watching the bats flying out of the caves is still one of our best memories from our holiday in Borneo. A visit to the various caves is a must-do. If you want to relax in a comfortable hotel with a swimming pool, the Mulu Marriott is a good option.

If you liked this article, pin it.

Globetrotters in heart and soul. In this travel magazine we share our best tips and adventures. Get to know us better on our about us page