Illinois castles: 14 wonderful castles in Illinois that are worth a visit

Are you looking for the best Illinois castles? You came to the right place.

When you conjure up images of gothic castles with pointed arches and stained-glass windows, you probably aren’t thinking about castles in Illinois.

However, there are amazing castles scattered throughout the state that you must visit.

This post may contain affiliate links. If you click one of them, we may receive a small commission (for which we are deeply grateful) at no extra cost to you.

Overview of the best castles in Illinois

Here’s a comparison table of all castes that we cover in this post.

Read on for a short description of all the Il castles.

Illinois castles you need to see

Illinois castles you need to see

Read on to discover more about these amazing Il castles.

Ravenstone Castle is a family-owned and built hotel in the charming town of Harvard, Illinois.

Perched on a hilltop overlooking rolling fields, this medieval structure was only just built-in 2001.

However, the size and attention to detail could fool you otherwise.

From the protruding stone towers of the exterior to the antique décor, it is evident that every aspect of the vast property was designed with care.

Guests can discover the beauty of the estate themselves by booking a tour, private event, or spending the night in one of the themed rooms!

The most amazing State Parks in Illinois.

Havencrest is an extravagant and ornate castle, themed around fantasy and decorated in the manner of ‘American Aristocracy.’

While the original owners built a much more modest home on the property, the latest owners, Alan and Adrianne St. George, began transforming and expanding the castle in the 1970s.

They designed every detail including all the original art and sculptures.

The ballroom has 24 life-sized figures and the Memorial Hall is the only place in the world where you can see full-sized, historically accurate replicas of the Titanic’s Grand Staircase, Dining Saloon, and the famous clock!

You won’t find the same intricacies and extravagance in a single other castle in Illinois.

15 cute towns in Illinois you need to see.

The builder and owner, Theodore Bettendorf grew up in Luxembourg and watched the construction of the original Vianden castle.

He began building his own replica, Bettendorf Castle, in Illinois in 1931.

While the doors have not always been open to the public, today it is the site of tours, kid-friendly events, and wedding ceremonies.

If you love wine, check out this post in which we share the best wineries in Galena.

There are 2 other Altgeld Halls at 2 other Illinois Universities

Built between 1895-1899, Altgeld Hall was originally called the “Castle on the Hill.”

At the time, governor Altgeld believed that buildings needed to be more attractive while remaining affordable.

He suggested the ‘Tudor-Gothic style’ as the most inexpensive means of doing so.

When Altgeld Hall was completed, it served as the entire university. It had classrooms, a boardroom, a library, a gymnasium, a lecture hall, laboratories, and even all the administrative rooms.

It has since undergone significant construction but not at the cost of the building’s character.

For example, a time capsule that was buried in 1974 remains undisturbed and will be opened in 2049 on the 150th anniversary.

If you are looking for a list of othe great things to do in Northern llinois, click here.

Another castle built by the enthusiastic Governor Altgeld was completed in the year 1899.

It is one of 2 university castles that aren’t named after Altgeld, even though this one is completely constructed in his preferred style.

At the time, many people enjoyed the Gothic Revival because the style was associated with higher education.

When it was built, it was also the only building on campus, similar to Altgeld Hall.

By 1909 more buildings were erected. Today it serves as the School of Music at the University.

After touring Europe in the late 1800s, Wilder W. Warner, a wealthy farmer, politician, and business owner, began building his own personal residence.

Drawing inspiration from his travels, he constructed an $80,000 estate. This may seem like a bargain price today but it was a fortune at the time.

It features 17 rooms, seven bedrooms, two living rooms, a library, a dining room, and a kitchen.

He built his castle with considerable detail and the highest quality, including Italian Marble fireplaces and hand-carved busts.

Warner died just four years after the house was built and left it to his son who lived there until he died in 1947. It has changed hands many times since then and is now no longer in the family.

The best things to do in Southern Illinois.

Often regarded as the “Irish Castle,” the rich history of the building is widely celebrated.

Built in 1887, real estate developer Robert C. Givins built the extravagant home as a gift to his wife and a way to spark growth in the neighborhood.

He built the three-story manor with Joliet limestone in the Richardsonian Romanesque style.

Each of the rooms showcased ornate décors such as tiled fireplaces, chandeliers, and stained-glass windows.

Today, the owners are the Beverly Unitarian Church.

Guests can take a look at Sunday services or during the city’s annual architectural festival.

Builder Bruce Busboom decided to create his dream home, or dream castle, in the late 1980s.

He chose secluded woods to create a lavish castle boasting a total of 5,000 square feet.

As you approach the main entrance, carriage lights illuminate a 600-pound drawbridge.

Gargoyles spit water 30 feet down into the moat below.

Not only that but there is a full pirate ship in the backyard!

Today, the property is available for overnight stays for families looking to enjoy a royal getaway.

This college town landmark is yet another castle built by the order of Governor John Peter Altgeld.

The governor found the original plans for the building to be too unattractive and therefore rejected them.

He proposed the architect’s design a building more closely resembling German castles with towers and turrets and thus was born Cook Hall.

While originally the library, and then the gymnasium, Cook Hall is now home to the School of Music housing practice rooms, rehearsal halls, and classrooms.

It was named after the University’s fourth president, John Williston Cook.

Dunham Castle was built by Mark Dunham, a horse breeder, in 1882.

He had acquired the land for the castle, which was a farm with a log cabin when his father died.

Dunham went on to build a great wealth breeding horses and decided to build a home unlike any other.

The inspiration was that of a French chateau.

It was built with brick, stone, different colored slate roofing, and was decorated with copies of French artwork, statues, and tapestries.

Over the years, the castle had many owners, but the original structure never changed. In fact, a lot of the original furniture was maintained and is now in its own history museum.

The house has undergone an extremely successful restoration and is open to the public for tours.

In 1927, the Lusk family traveled across Europe and consulted European architects as they began to build “the castle.”

In 1930, the home became an instant landmark.

Grand oak trees and evergreens line the stone bridge that spans the moat below. The towering stone fireplace, medieval turrets, and gothic arches are a captivating sight to behold.

16 waterfalls in Illinois you need to see.

The home has largely retained its original character while adding to the fantasy.

The latest owner has added two stone fire-breathing dragons at the front of the property to add to the whimsy without taking away from the elegance of the surrounding greenery and stone castle façade.

Today, the castle is a symbol of the community and home to numerous charity events, parties, and fundraisers.

Additionally, the castle is popular every Halloween as live music, dancers, and entertainment liven the castle.

Stronghold Castle was built in 1929 by Walter Strong after he visited Hearst Castle in California.

Strong was a successful writer who worked to expose corruption during the Prohibition Era and he decided to turn the home into a castle.

The highlight of the property is the five-story circular tower whose staircase appears to be floating due to unseen steel rods. At the top is an observation deck with stunning views of the countryside.

10 amazing canyons in Illinois you need to see.

The children sold the property to the Presbyterian Church who created the Stronghold Retreat and Conference Center in 1963.

The church remains the owner of the castle and hosts camps, retreats for spiritual enrichment, family camping, and much more.

The castle was built around a 138-foot water standpipe that was used to fight fires in 1869.

Today, the castle stands as a cherished relic amongst the modern skyscrapers and venues of downtown Chicago.

The wealthy and eccentric George Metz built Villa Kathrine in 1900.

The structure strays from the European medieval style of previously mentioned castles with a Moroccan aesthetic.

Inside the castle is a harem, a courtyard, and a reflecting pool. Beautiful Mediterranean archways, carved lattice woodwork, and domes topped with a Muslim crescent make this property unlike any other castle in all of Illinois.

As you can see, Illinois castles are riddled with history of early Americans and today remain important symbols of the communities.

Make sure to stop and marvel at the architecture, imagination, and historical culture of these beautiful castles! 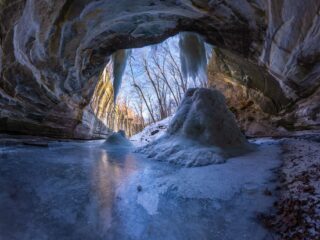 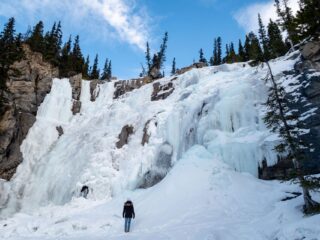 Jasper in winter: 25 Epic Jasper winter activities you must do
Read Next Post →
Hi, we are Kris & Sylvia. Globetrotters in heart and soul. In this travel magazine we share our best tips and adventures. Get to know us better on our about us page .