China is a fascinating country with bustling metropolitans to rural villages, UNESCO world heritage sides like the Great Wall and abundant nature. But maybe the culture or the language is stopping you from visiting the country.  Or you might think that because of this it would be better to take part in an organized tour.  In 2011 we traveled through China on our own.  We did end up with some funny problems from time to time but overall it was a great vacation.  And I would say that the funny situations we sometimes encountered were rather an enrichment of our vacation instead of a letdown.  Here are 8 tips that will help you to travel independently through China.

How to travel independently through China?

Take a picture with you of what you want to visit

Not many people speak English so it’s easier to show a picture of where you’re going to ask for directions. Some travel guides contain the names of touristic places in Chinese.  We tried to point at these first but that didn’t really work.  Maybe because there are at least 10 different Chinese dialect groups and over 50.000 different Chinese characters.

Make use of Google Translate

Make sure you have Google Translate installed on your phone.  Instant Translation will instantly translate the restaurant menu or whatever you’re pointing your mobile phone from Chinese to English.  It’s magic!  To get it working you off course need to install the app and download the languages locally on your phone.  Here’s how you do that. A bit of a strange translation…

Ordering at the Restaurant

Some places have menu’s in English but you don’t have to limit yourself to these “tourist restaurants”.  We had better, and cheaper, food in other restaurants.  To order you can translate the menu with Google Translate or you can do like we did and have a look at what other guests are having and point at their food to order.  I wouldn’t do it at home but it worked in China and the Chinese absolutely loved it when we did it.

Make sure to check Ctrip for hotels and domestic flights.  It’s a huge local travel company that’s not so widely known abroad but very popular in China.  It turned out all our domestic flights were cheaper when we booked them on Ctrip so you can save quite some money with this tip.  For one of our flights, they had an offer that when you booked an economy ticket you were upgraded to business.  Another great benefit.  The website is in English and they accept all major credit cards.

Get used to the busy cities

Not much you can do about this except trying to get used to it.  Chinese are definitely used to it and they don’t need much personal space.  A lot less than what we Westerners are used to.  It took us a few days to adapt to the constant flow of people everywhere you go.  The subway in Beijing is packed with people every hour of the day.  It only gets even worse at rush hours when people stand ready to push you into the cars.

Queuing is also common.  At first, we did not stand too close to the person in front of us but we quickly discovered that by leaving this space it was not clear for the Chinese that we were standing in line.  They just got in line before us… 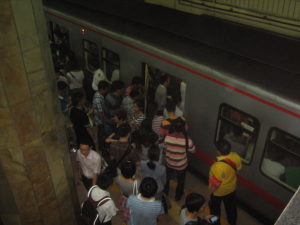 Avoid visiting tourist hot spots on weekends if you can

Chinese do a lot of domestic travel and some of their destinations are probably on your list as well.  The forbidden city and the Chinese wall are just a few of them.  The Yellow Mountain (Huangshan) is also popular with Chinese.

As a result, these places get really crowded during the weekends.  If you want to escape the hustle and the bustle of the cities it’s better to plan your visit to these tourist hot spots during the week.  Otherwise, you will just arrive in another crowd of people. 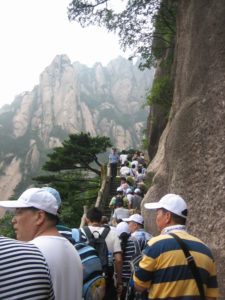 Visiting the Yellow Mountain during the weekend

Public transport is very well organized and modern.  Cities like Beijing and Shanghai have a very good subway network.  By means of plane and train, you will be able to quickly get to wherever you want.

To book plane tickets you can make use of Ctrip or the website of the airline company.  They all have English websites.  To buy train tickets you may need to go to the train station and this is where it gets complicated.  The major train stations usually have one English speaking ticket window but not all of them do. Not all train tickets are sold in every train station and for some trains, it’s only possible to buy tickets the day itself.  So it’s better to do some homework before you head to the train station and come back empty-handed.  Due to this complexity hotels also offer to buy the ticket for you (for a fee).  This can be a good choice as you get some time free to do other things that stand in line.  (we queued one hour for our train ticket in Beijing’s central station)

The cultural differences can make it look like Chinese are not friendly or unhelpful but this is absolutely not true.  Here’s one anecdote of our trip about our excursion to the Chinese wall.  We needed to get tickets in Beijing’s North train station (trains are going from another station now).  There was no English speaking ticket window in this train station so we started walking around in the station shouting “English?, English?” until we finally found someone who spoke English.  He queued with us only to learn that we could only buy tickets for this particular train on the day itself (and it was too late to go that day).  What he did was he wrote everything we needed for the day after on a piece of paper that we just had to show to the person selling the tickets.

As you see it can be a little adventurous at times but it’s perfectly possible to travel independently through China.  And those funny moments made our trip even better as we could share lots of funny stories with our friends and family.  Things we’re still laughing about today, memories for a lifetime! 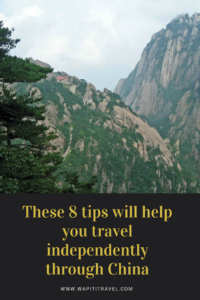 Wow, even I am a Chinese descendant , I still not very confident in traveling without a group with the travel company!!! I guess I needed to learn from you guys!! Be more brave.

Thanks for the compliment!

Globetrotters in heart and soul. In this travel magazine we share our best tips and adventures. Get to know us better on our about us page